Prostate cancer forms in the tissue of the prostate gland which is approximately the size of a walnut and found below the bladder and in front of the rectum. There are approximately 250,000 new cases each year with approximately 35,000 patients dying of the disease annually.

Known risks for prostate cancer include race with African American men being more likely to develop prostate cancer. Another risk factor is age, men who are older than 60 are at increased risk. Family history is also a risk factor, in particular patients with a father or brother diagnosed with prostate cancer.

Most patients with prostate cancer have no definitive symptoms when it is caught at early stages. Testing for prostate cancer includes an annual prostate specific antigen test (PSA) as well as a digital rectal exam to assess the prostate.

Some signs of advancing prostate cancer are also signs of benign growth within the prostate gland including: weakened urinary stream, difficulty evacuating the bladder, blood in urine or semen, and pelvic pain or bone pain once the disease has progressed. 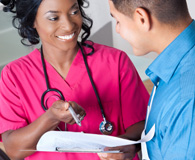