(Town of Nelson, NY – Sept. 2011) Who better to raise awareness of yearly screening for prostate cancer than someone who’s been diagnosed? And with a new treatment recently approved by the Food and Drug Administration (FDA), a patient can hope to prolong their life.

Fifty-nine-year-old Larry Omans of Nelson missed a screening one year and by the following year tests concluded he had prostate cancer that spread to his lymph nodes. That was in 2007.

“I went from being OK to having a PSA (Prostate-specific Antigen) of 125.7,” Omans said. “It was already aggressive and in my lymph nodes.”

Prostate-specific antigen (PSA) is a protein produced by cells of the prostate gland. The PSA test measures the level of PSA in the blood. The higher a man’s PSA level the more likely cancer is present.

According to the New England Journal of Medicine it was not rare to find biopsy-detected prostate cancer in men with PSA levels of plus or minus 4.0 ng per milliliter, a level thought to be normal.

Omans began four and half months of chemotherapy that left him weak followed by 42 radiation treatments and hormone therapy.

He remained on hormone treatments that would have ended in October of last year but his PSA levels started to rise. That’s when his urologist, Dr. Christopher Pieczonka of Associated Medical Professionals of NY, located in Syracuse suggested he try a new treatment approved by the Food and Drug Administration in April of 2010.

PROVENGE is the first FDA-approved autologous cellular immunotherapy indicated for the treatment of men with asymptomatic or minimally symptomatic metastatic castrate resistant (hormone refractory) prostate cancer. It is designed to stimulate an immune response against prostate cancer.

Omans explained that he had three treatments, each two weeks apart. He said his white blood cells were collected, which took about three hours. A courier picked up his blood and it was taken to the Dendreon Manufacturing Facility in New Jersey and treated with PROVENGE. It was then incubated for 48 hours, brought back to his doctor’s office in Syracuse and injected back into his body. Omans completed his treatments at the end of June with no side effects.

“After the first treatment was done, I went shopping,” Omans said. “Chemos the worst. I lost my hair and was weak but I didn’t get sick.”

Omans continues to see his doctor for bone scans and CT scans but has no idea how much longer he has.

“[PROVENGE] extends your life,” Omans said. “It’s not a cure. I’m not going to say it’s a cure because it’s not. How much longer would I have if I didn’t take it? I wasn’t supposed to be alive now.”

Dr. Pieczonka said it takes about three months for the treatment to begin working and at Oman’s stage of cancer it could increase his life up to four months.

“Hopefully he will have even longer,” Pieczonka said. “I’m crossing my fingers that he has a good run of this and has many, many years.”

In one case PROVENGE extended the person’s life up to 27 months. Pieczonka has treated eight other men so far and everyone has continued their normal activities with no side effects, he said. Most common side effects reported in studies were chills, fever, fatigue, back pain, nausea, joint ache and headache.

Pieczonka said, although very expensive costing $90,000 it’s the only medicine of its kind, but the treatment is controversial. In most cases, treatment is only approved if the cancer has spread to the lymp nodes and bones and the man’s hormones have stopped working.

“We really need to show it’s going to extend life,” Pieczonka said. “Patients should be given PROVENGE as a first treatment.”

But that’s not the case. Men who are diagnosed are usually given more traditional treatments of chemotherapy and radiation or the prostate is removed.

“If you take the prostate out, it could extend life up to 25 years,” Pieczonka said. Studies are being done now that would allow patients to have PROVENGE first, he said. But again, studies have to prove it extends life longer than traditional treatment.

Pieczonka advises men to do their own research and get two, three or even four opinions before beginning any treatment.

And Pieczonka said if you don’t see your doctor for routine care, it may be too late.

“[Prostate cancer] is very, very treatable. It can be cured if caught early enough,” he said.

More than 30,000 men die a year of prostate cancer. It’s the second most common cancer in men in the U.S. and the second leading cause of cancer-related deaths in men. One in six men will be diagnosed with prostate cancer during his lifetime.

If your father or brother was diagnosed, your risk is two-and-a-half times greater of developing prostate cancer.

Omans continues working at Ferris Industries in Stockbridge as an assembly supervisor where he’s worked for 10 years. He enjoys his Harley Davidson motorcycle, golf and looks forward to deer hunting.

Omans wishes he hadn’t skipped that year with his doctor.

“I shouldn’t have had it that advanced. I’m too young,” Omans said. “They compared me to Lance Armstrong. Don’t’ skip a year. Get your check-up every year.”

Margo Frink is vice president of M3P Media LLC and managing editor of the Madison County Courier. She can be reached at Margo@m3pmedia.com or 315-481-8732. 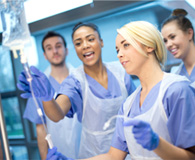